For this week's post, I would like to highlight another site in Siberia, that of the Diring Yuriakh site.  A controversial hominid site still to this day, Diring Yuriakh continues to provide much for debate amongst archeologists.

Discovered by and excavated for 15 years by Yuri Mochanov, the site resides at the confluence of Diring Yuriakh creek and river Lena, about 140 km south of Yakutsk in Siberia (Hirst).  Compared to other sites in Siberia, which have often been classified as Middle Paleolithic, The Diring Yuriakh site has been classified as a lower Paleotithic, estimated to have been occupied first at about 300,000 years ago.

Regarding the artifacts found within the site, I turn to Kris Hirst for description:

"Four thousand stone artifacts have been found at Diring Yuriakh, most of which are cores and unmodified quartzite debitage. However, a few tools from the assemblage include unifacial pebble choppers, flake-and-core tools, hammerstones, and anvils, similar to collections found in east Africa" (Hirst).

Quite a large amount of stone tools and technology, especially for a Siberian site.  Hirst's note about similar collections being found in east Africa strikes me as an odd similarity,  If this is indeed the case, was their any similarity between the occupants, or was it just do to the spread of stone technology?

The dating of these artifacts is another odd matter in itself:

So far, this has been the only dating method that has been conducted.  As such, it has sparked controversy over the exact age of the site.  The controversy exists over both the context of the site and the assemblage of artifacts.  Yuri Mochanov himself argues that the site is between 1.8 and 3.2 million years old.  He basis is that of the similarity of the technology found to that of Oldowan assemblages.  The TL dating estimate, at the least 260,000 years old, is still questionable to most researchers in that it is 60,000 years older than any other dated site in Siberia.

To add to the controversy, Diring Yuriakh is an isolated site, with no nearby sites to justify its context and artifact assemblage.  This would be like if Egypt had only one pyramid, and it alone defined all of Egypt's archeological past.

Now, according to Hirst, there are two possible sites that could be linked to Diring Yuriakh:

"Two other sites in Siberia (Ulalinka and Mokhovo I) have flaked stone assemblages thought to date to this period, but they are both disputed, both on chronology and on the identification of the artifacts as human-made" (Hirst).

What I am pondering though, is how can all these sites all share characteristics but still be disputed as linked?  If there cannot be a consensus made, how can research advance?

My viewpoint on Diring Yuriakh is this: while the site is still considered controversial, I for one believe in it's authenticity.  There have been many other sites in Siberia that have defied all that was believed to be truth in the archeological record, why would this not also be such a case?  I argue that there must be some connection to Diring Yuriakh, somewhere in the vastness that is Siberia. 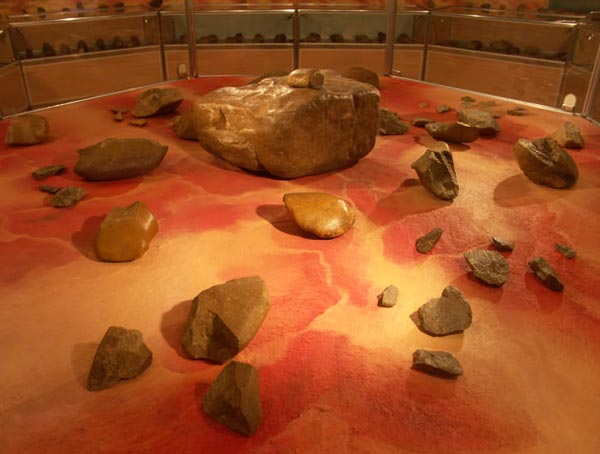